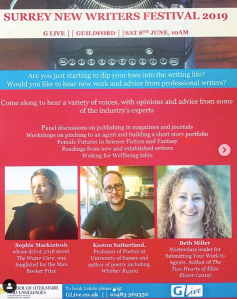 Looking forward to attending Surrey New Writers Festival on Saturday 8thJune in Guildford. Fantastic programme of events for the day including; panel discussions, readings, masterclasses on pitching to an agent and building your career as a short story writer. There will be a wellbeing table, with the opportunity to chat about your work, a poetry stage, headline readings and an evening soiree. Phew! That’s a lot to pack into one day, but well worth the price of the ticket (with lunch included). Check out the link above to find out the finer detail.

What I’m really interested in is a panel that I will be chairing on the theme of ‘Female Futures’. We will be discussing the future of women’s writing, as well as women writing the future in Science Fiction and Fantasy. I will be exploring this theme with Kate Potts, whose second poetry collection, Feral, sets out to explore and trouble the boundary between ‘animal’ and ‘human’; Stephanie Saulter, who is the author of novels Gemsigns, Binary and Regeneration, a science fiction trilogy which uses the lens of an altered humanity to take a new look at the old issues of race, class, religious extremism and social conflict; and Kerry Drewery, the YA author of Cell 7, Day 7 and Final 7, a dystopian trilogy which takes a sinister look at the future of the justice system. Join us on the 8thJune for what promises to be a fascinating discussion.

During the day, we will also be launching our third print issue of the Stag Hill Literary Journal, carrying the same theme of Female Futures. My story, Shooting Stars, will appear in this issue; a time-travelling alt-history look at one hundred years since British women were given rights to vote. Copies of the issue will be available for purchase and we will also be doing readings during the day.

Look forward to seeing you there!

The road to nowhere;
a road of indistinct nature
that baffles and bemuses.
A creature of comfort,
a black hole in the middle
of a City of Bones.
The clouds open up
beneath my dogged stride
darting through
sheets of purple rain.
The ground beneath me rumbles
and a great crack sunders the earth.
I ride through the darkened skies
on the creature’s black-winged back.
Ruby eyes illuminate the space,
burning leaves, baking the tarmac.
And oh, how the city groans.

En route to somewhere else 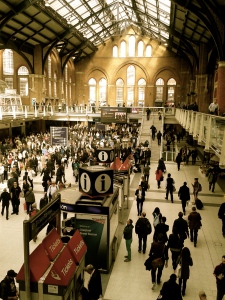 Apprehensive about my day,
but books break the boredom and
chatter gives up its secrets.
Coffee fuels the adrenaline;
excited hardly cuts it –
green-eyed and go, go, go…
Irritated by the hoards,
orange and yellow destinations lure me
and people put the place into focus.
Perfume clouds me in waves, while
pastries smell better than they taste.
Red is the colour of rage with
traffic fumes, noxious and nasty.
Trains are going somewhere, while
the tannoy speaks a language of travel.
This is a place I pass through en route to somewhere else.

I met him on the tube in the tunnel between Kentish Town and Archway.

The lights dimmed with their flawless flickering,

illuminating the ghost of his smile, in yellow lamplight.

A figure in the window, the dreamer wanders.

The smell of fetid fruit hung ripe in the air as the other passengers sat,

A snorkel splutter splintered the silence, and my heart slammed into my ribcage.

Was it fearlessness or foolishness that made me say,

‘What the fuck are you doing here?’

He smiled all the while, eyes boring a hole through my soul.

The train jerked into motion, lights exploded into being and the passengers stared at me;

the eccentric lone woman, talking to an empty space outside the window. 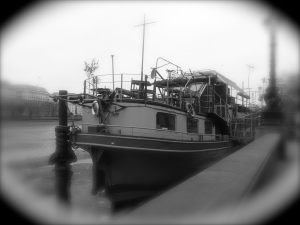 I sail alone with no sails at all.
A million voices chattering down
with the talk-talk of rag events
like written rogues of runaway bones
and players to porcelain poly perspex.
Makes no sense to me at all,
reverse the words, shake it up
in atomic deconstruction,
hoping to emerge in the right order.
His sail ship is docked in port,
waves slapping the wood,
air that tastes of salt fish and seaweed,
screeching seabirds calling to warn
and the thunk-thunk of footsteps on wood,
as he stops in front of me and sighs.
‘You could have called,’ he says,
retrieving a golden pocket watch
and handing me a Nokia to the future.

How to Brew up a Glass of London Hooch

Welcome to the Bloodletter’s Arms for our annual seasonal celebrations. Tonight I’d like to introduce you to our speciality house tipple, which has been fermented in oak coffins for the discerning taste of our gothic clientele. It’s red, bubbly and bursting with the taste of iron girders. We call this one, ‘Vlad to be here’. I propose a toast to you all, to an eternity of indifference and alternate reality. Here is my secret recipe.

(WARNING: This is not for the faint-hearted; children should not try this at home without adult supervision.)

Some people feel slightly nauseous, but once this process is complete you’ll feel perfectly normal.

Edgware Road is long like a leverleech
and has chilly feet and jelly wellies.
They do this thing called shopping where
they barter for exchangeables like trappings.
My food is a short stubby cyber plug
which tastes of smorgbord.
They have exploding drinks here, so you
have to be quick lest you end up wet and thirsty.
My bed has air-conditioning and foldaway
flaps that don’t cover my strattlebean.
Sometimes we eat in the big yellow ‘M’,
but not before sundown.
They scrape the dirt from their eaters with mint,
but when I tried, my human ran away.
I followed, but a big red ship tried to run me down.
Good thing I had my warblers on.

Silence. Whispers. Echoes in his head.

An abandoned kindergarten at Dalston Junction. All Hallows Eve. How apt.

snapped the rusted chain with his bolt cutters and the gate screeched open.

Had to find her. Had to stop the menace, the cat-calling, for her mother’s sake, at least.

And there she was, small, shy, sly and bitten by evil itself.

Her gaunt, hollow cheeks sucked in at the sight of him

and her marbled veins pulsed with hunger. She smiled,

Unblinking eyes looked him up and down with dispassion.

but not the speed with which she shot out to meet Frederick,

leaving a trail of vapour in her wake.

Her touch was stone cold and froze his skin on point of contact,

‘till he screamed like he was set on fire.

With a gentle touch she leaned in to rest her teeth on his neck.

Her breath was like polo mints with a hint of ginger and a sub-layer of decay.

She buzzed like a humming bird; did she have wings now?

Or was that the venom taking effect on his consciousness?

Lulled to a sinking sleep, he slipped into her arms and fell,

drowning in her steely embrace.